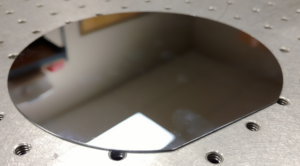 A unique capability of our flagship thickness measurement device, OptiGauge II, is its ability to measure the individual layer thickness of a multiple-layer sample.

The OptiGauge II measures using a 1310nm wavelength. This is an ideal wavelength for measuring through nearly all visually transparent and semi-transparent objects.

A visually opaque material that is highly transmissive at 1310nm is silicon. This makes silicon an ideal sample for optical thickness measurement.